3 Reasons October is a Fantastic Month for NYC Bloggers

Why is October my favorite month, as the editor of Downtown Traveler? In addition to hosting Halloween, the best holiday of the whole year (no arguments, please), this month brings several exciting and traffic-generating events to the Big Apple. October is traditionally our biggest month for page views, as readers find stories about Halloween, haunted houses and NY Comic Con through Google searches.

See below for three popular October events that draw readers to Downtown Traveler.


I've been covering the Halloween haunted house circuit for the past 4 years, first on Examiner.com and then on Downtown Traveler. It's been quite a learning curve; when I started out, the thought of interacting with an actor dressed as a deranged clown sent chills down my spine. Now I'm more of a jaded viewer-- to borrow the title of my favorite horror blog-- having "survived" going through Blackout, NYC's scariest haunted house, twice.

On Downtown Traveler, we typically cover the big 3 haunted houses (Blood Manor, Nightmare and Blackout) plus a few smaller shows or Halloween-related performances. Blackout generates the most interest among readers since it is so mysterious; it requires a waiver, features sexualized situations and has traditionally made visitors walk through alone. My 2013 review of Blackout Haunted House generated over 20K page views in the past month alone, with no promotion on social media platforms. The article was even quoted in their 2014 trailer (above), alongside leading pubs like the NY Times.

My favorite pop culture event of the year, hands down, is New York Comic Con. I started covering the convention around the same time I hit the haunted house circuit, and there are a few parallels. Both attractions feature timely pop culture references and amazingly detailed costumes, as well as committed performers. The attendees are incredibly friendly, the vibe is upbeat and there are many artists selling unique work, ranging from commissioned portraits to paintings of original characters.

The fanboys and girls of NYCC show their love for comics, movies, anime and video games by dressing as their favorite characters. Their enthusiasm is inspiring-- and I've actually gotten a Halloween costume idea or two from attending the Con! I especially enjoy reporting on the creative kids costumes and the best women's costumes, since are not usually groups that outsiders associate with Comic Con. In reality, the event attracts a diverse crowd from all over the five boroughs as well as the tri-state area.

The Village Halloween Parade is always entertaining, whether you march or just watch from the sidelines. Even if you can't get near the actual parade-- foiled by police barricades-- the party stretches for several blocks on either side of the route. And EVERYONE in the vicinity is dressed in costume, displaying looks that range from outrageous to predictable. I consider the Village Halloween Parade to be one of NYC's best photo ops... perhaps second only to the Tompkins Square Park Halloween Dog Parade.

Do you have a tip for an awesome October event in NYC, LA or Chicago to cover on Downtown Traveler? If so, leave a comment or send a Tweet to @downtowntravel.

Downtown Traveler turns 3 years old! Our top posts from the past year

I was scrolling through old posts on Downtown Traveler when it hit me: this November marks the blog's third anniversary!

Downtown Traveler was founded in November 2010 after my fiance and I returned from a round-the-world trip and had settled back in New York.

Our adventure began when we left our corporate jobs to travel in Spring 2008, several months before the Great Recession led to massive layoffs. When we departed, the idea of a career break or round-the-world trip (RTW) was far from mainstream in America. Even the airline reps who helped book our RTW ticket were bemused and a bit confused by the process! Just a few months later, when thousands of professional Americans found themselves out of jobs, the media embraced stories of corporate refugees on long-term adventures.

I caught the writing bug on our trip and blogged throughout, although always on a third party platform (first MyTravelBlog.org and then Examiner.com). Since we didn't have a branded site, we missed out on the media coverage and early boost in followers experienced by other US "early adopters" of RTW blogging.

However, there were benefits to waiting to start a branded site. We had more time to flesh out a concept and find a suitable name, and didn't have to limit the focus to budget travel or backpacking.

In fact, our most popular content includes an eclectic mix of arts, culture and travel stories. Scroll down for top posts from the past year.

1. Review: What to expect at Blackout Haunted House in New York City (Halloween 2013)

Hurricane Sandy may be history, but the storm's presence can still be felt in downtown Manhattan. My neighborhood, the East Village, is just ending its 4th day without power or cell service.

It's not fun living in "SoPo" (South of Power, the new name for the unfortunate half of Manhattan), but it is definitely interesting!

Click here to read my photo essay about the hurricane and blackout on Downtown Traveler!

I was also interviewed by the Wall Street Journal this week because I used a pay phone when the power went out. A novel concept, in this day and age! Click here for the story about New Yorkers resorting to old-school technology after Hurricane Sandy.

And click on The Daily Beast for an Instagram photo of me using a bonafide NYC pay phone. (Rest assured I hand sanitized my cheek after touching it).

If you are stuck in the blackout, good luck! May our power and cell phone reception return ASAP. 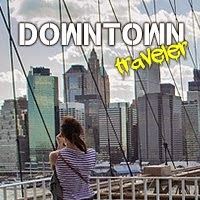 Leslie Koch
New York, NY, United States
I'm a NYC-based market researcher and writer with a passion for travel and art. I've backpacked around the world and am the founder of DowntownTraveler.com.